At the workout i was a volunteer and had the role of Water Crew Team Leader (which I renamed to the Splash Crew).

My friend, Pirate Kate, had never met Mish so I was secretly totally excited for her as she was soon to experience a moment with someone that she would remember forever.

As Pirate Kate & I arrived at the park (a touch late) I saw the volunteers gathered in a circle about 100m away but I was headed to the Registration Tent first. I couldn't understand why they were all signalling for me to go to them first.  I was thinking to myself "I've done this volunteer role before so I know I have to go to the registration tent first". Anyway, I gave in and detoured to the group of volunteers first.

As I arrived I said hi to the team and apologised.  I thanked my friend, Pirate Liz, for doing the roll call and handing out uniforms for me. I then realised that standing next to me was Michelle Bridges!!!  "Aaaaaahhhhhhh!" was what I screamed as I saw her looking at me.
"Splash!" is what she replied.
We all cracked up laughing and she liked our Pirate outfits.  I STILL get star struck and LOVE this woman to bits.

I've had so much Mish time over the last year so I usually stand back and enjoy seeing others experience Mish for the first time.  They are usually a blubbering mess and she is so gracious and kind with beautiful words that makes them shine, smile and cry all at once.  I was so grateful that Mish acknowledged me and we had a brief chat.  So so special. 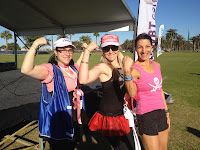 I took my team over next to the small stage and i jumped up on it. I was about to brief them on the run down of our morning. Then I had a brilliant idea! Let's get briefed in plank position!!! Some witty videos and comments were exchanged leading up to this day between the Team Leader of Registrations & Scanning, Leanne H, and I that involved planking and awesomeness.  My team were up to speed with this so I thought it would be fun to carry on with that tradition.  So we dropped and planked while I read our the brief.
Occasionally I hear a team member say "Hurry up Mary!!" but I knew it was Pirate Kate so I kept taking my time :p 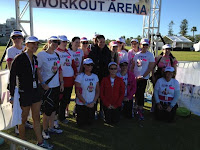 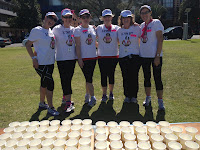 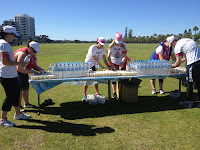 We had the cameras flashing and it was just a whole lot of fun! I'm pleased to say I held my plank for the whole brief - it was tough but that's just how I roll :) 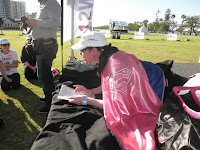 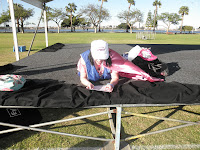 To keep the tradition going some of the Splash Crew planked in the group volunteer pic with Mish too.  That was lots of fun.  We then got a Splash Crew pic with Mish.  My team was telling me to stand closer to the middle but I told them I've had my Mish time so I stood on the end.  Can't wait to see that pic!

The witty banter continued throughout the workout between Leanne H & I.  I found it hysterical and it was fun for those around us too. 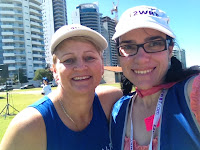 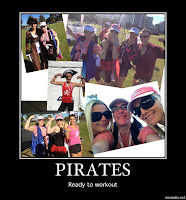 To Be Continued...
Posted by Splasharama at 2:06 PM

Who's helping change my life

Splasharama
I went from Yuk to Yay in 2011. Now I'm enjoying my new mind & body and Just Being :)