52 weeks of weigh ins and here I am!  Squee!!!
48kg lighter, clothes size dropped from 24 to 10-12, I'm a whole lot more confident, a mentor to others, and for the first time ever I am loving my life.  I am amazed at what has come my way beyond weight loss.  I just wanted to lose weight and be normal.
As I sit here, 52 weeks into my new lifestyle, I reflect on the ups and downs of the last year.

The penny dropped with Crunch Time
I read my sister's Michelle Bridges Crunch Time book during our 2.5 week Christmas 2010 family theme park vacation on the Gold Coast.  The theory was simple, you ate normal food and exercised.  We spent 11 out of 17 days at theme parks and I had a blast!  However, at 110kg they tired me out every day.  Time to make a change. 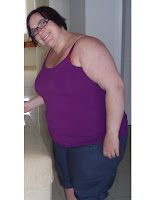 Weight Watchers didn't suit me
I was lucky enough to be selected to participate in the 14-week Weight Watchers at Work Program in February 2011.  I need regular accountability so the weekly weigh ins suited me perfectly.  However I  didn't believe in the principles.  A banana has "zero points". No, the fact is a banana has 100 calories.  After three weeks I swapped to following the Crunch Time book principles of 1200 calories in and 500 calories out but kept weighing in at Weight Watchers at Work for accountability.  I lost 16.8kg in 14 weeks.  At Week 14 the WW consultant said to me "You're my biggest success and you're not even following my program!".  I speak the language of science and facts so Crunch Time made so much more sense to me and it suited me.

Met Mish for the first time
I attend Filex each year as part of my job.   It's a health and fitness convention weekend in Sydney.   In 2011 I attended Mish's Filex presentation, had a chat to her and had my photo taken with her.  She didn't know me and I wasn't even a 12WBT program member then but she had all the time in the world for me and was so encouraging.  The Michelle Bridges Empire blew me away.  What a woman, what an empire! 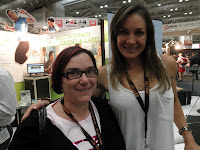 Inspired at Round 1 2011 Finale in Melbourne
My sister participated in 12WBT Round 1 2011 while I was weighing in at WW.  She lost 15% of her bodyweight and loved the 12WBT program!  I attended the Melbourne finale party as her guest.  She was so excited to meet Mish and have her photo taken with her.  There was so much achievement, success, happiness and confidence in that huge room at Silk Road and I wanted it.  After the amazing presentations to the top transformers and watching the wonderful video, I turned to my sister and said "I want what they have, I can do this.  I'm going to lose 20% of my body weight in Round 2".  I made the commitment there and then to my sister.  No turning back.

A life-changing 12 weeks
I continued living the Crunch Time lifestyle and a whole world of resources became available by joining the 12WBT program.  A super-supportive online medium that is a one-stop shop for how to live a healthy and active lifestyle.  I had a goal to lose 20% of my bodyweight in 12 weeks (18.6 kilos).  I was on a dream run of weight loss and then I got sick for two weeks and couldn't train.  But I didn't give up.  I controlled my controllable and got back into training once I got over the flu.

Back on track and it just seemed too easy.  When was this dream run going to end?  I didn't want it to end and needed something else to keep me on track.  I started my blog in June so that if anyone happened to come across it, I did not want them to read that I put on weight.  I posted my weekly weigh in results as well as other things about my journey.

The dream run was continuing and again, I was worried it would suddenly end.  So I started my Mini Comp Round 2 with 13 women.  They emailed me their weight loss each week as well as a summary of their week.  We became our own little support crew and it was perfect.  These people opened up their lives to me and I learnt so much from them.  I am forever grateful.

Week 11 weigh in and I was just 1.7 kilos off my goal for the 12 weeks.  I had a red flag day in Week 12 where I took my own food as NOTHING was going to get in the way of me and my goal.  Week 12 weigh in was perfect, a 1.7 kilo loss which totalled a 20.04% weight loss for the 12 weeks - goal achieved!  I was so excited and I just kept on living the lifestyle between rounds 2 and 3.  I had no urge to binge or stray from the program which was great.
Round 2 2011 Finale Workout and Party Brisbane
I blogged my whole trip to Brisbane for finale with my sister in August.  Let's just say that nothing can prepare you for an honour like what I received.

Round 3 2011 Lean and Strong went so Wrong
I was on top of the world.  I felt amazing, my body was doing amazing things, my mind was set to conquer the world and I was training for my first fun run while getting the muscle definition I always wanted.  My 12 week plan crumbled at Week 4 and this is how.

Round 3 2011 Lean and Strong Submission

Round 3 2011 Finale Party Sydney
My sister, cousin and I flew into Sydney for a long weekend and to party with Mish.  Illness stopped me from attending the workout but nothing was going to stop me from attending the party.
Walking up the stairs to the hairdresser I crossed paths with 2 ladies coming down the stairs.  One said "You're Splasharama!".  I looked up, smiled  and said "Yeah".  She then said "Everyone is talking about you!"  I was so embarrassed that I put my head down and just kept walking up the stairs!  How rude of me!
I sat down with the hair dresser and told him I need to look fabulous because everyone is apparently talking about me.  He thought I was funny but BOY did he make me look fabulous.  We had so many laughs while getting my hair done. 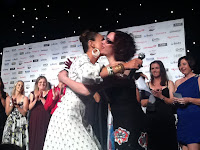 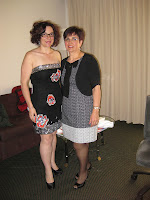 Eating Clean, No Training To Be Seen
Basically no real training took place from October 2011 to February 2012.  I did a few light exercises at home in January but that was pretty much it.  Eating clean maintained my weight while I was unable to train.  My muscle definition disappeared and my fitness dropped.  I never gave up though as I knew that sometime soon I would be back in tip top shape.

Fatigue is a Bitch
My Neurologist gave me the not so good news on 31 January 2012.  Apparently I was meant to be all better by now.  Instead he advised that I would suffer from extreme fatigue for the next six to twelve months.  I was also told to avoid overheating as that would result in instant extreme fatigue.  However, he advise to keep leading as normal life as possible and to train when my body is capable of it.  Wow, it wasn't the fantastic news I was after, but such is life.   Next MRI is in May… fingers crossed I'm on the mend!

Round 1 2012 Lean Body & Strong Mind
I got stuck into 12WBT Round 2 2012 Lean and Strong.  I decided to only do Monday to Friday's training sessions and leave out SSS and the weekday cardio components as aerobic activity makes me overheat really quickly.  I tried a step class and spent more time drinking water and standing in front of the fan than doing the super low impact version of each exercise.  It wasn't good for my mind so I haven't returned to it.   I did the Lean and Strong free-weights exercises in the well-ventilated areas of the gym so that cool air would brush past my skin and keep me cool.  From Week 9 I reduced the sets from 3 to 2 as the additional reps in the sets were making me too hot and I could not get through it all without overheating and exhausting myself.  I basically modified the program to suit my body, even though my mind wanted to do it all and more.

Twelve months later - Who am I now?
- I am normal sized and I don't stand out in a crowd.  I blend in and I love that.
- I am a strong minded person that choses to see the positives in all aspects of life and work.
- I am confident, fun and love the cheekiness that I now exude.  My real personality that was hidden for too long has finally come out to play.
- I am in control and put myself first.  All other aspects of my life have benefitted from me doing this, especially my work.
- I am a role model to my family and friends
- I am a mentor to people that are on their way to creating the best version of themselves.
- I am grateful for having my sister expose me to such an amazing and simple lifestyle.
- I am thankful to the Michelle Bridges Empire for putting together such a wonderful program that has now become my lifestyle.  A huge thank you to Mish, Bill, Amelia, Tim and everyone else that got the 12WBT program up and running.
- I am studying to be a personal trainer so I can help Mish make the world a fitter and healthier place.
- I am determined for my abs to pop out so I am back for Round 2 2012 Lean and Strong.
- I am Splasharama. 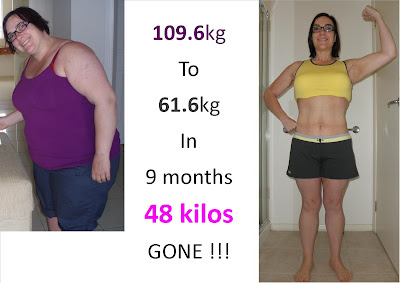 Posted by Splasharama at 3:41 PM

Who's helping change my life

Splasharama
I went from Yuk to Yay in 2011. Now I'm enjoying my new mind & body and Just Being :)